Wowsers, TV show presenter Rachael Ray can show us a lot about Virgo energy, she is *drumroll*…

I know very little about this chef and personality, other than her fascinating co-ordinates, but I did just watch a video on how on August 9th 2020 her house in Lake Luzerne, NY suffered a devestating fire.

The Moon and Mars (& Chiron) were in Aries, sandwiching her natal Saturn in Aries. Her natal Leo Mars was at the midpoint of transiting Mercury (9º20′) & Sun (17º43′) in Leo; transiting Mercury in Leo was trine both transiting Chiron (9º5′) and her Aries North Node.

Transiting planets in Capricorn (Jupiter 19º11′, Pluto 23º9′ and Saturn 27º13′) were all retrograde, and aligned with her own stellium [Mercury-Venus-Pluto-Moon-Uranus].

Naturally, because she has such a glut of activity in this sector of the skies the transiting planets trigger many points; she also has Neptune sextile her Moon to the degree.

Despite the fire it seems the star has a remarkable attitude in the aftermath, and I’m sure she will rebuild with planets in earth helping her improve on solid ground.

Prayers to you Rachael Ray! 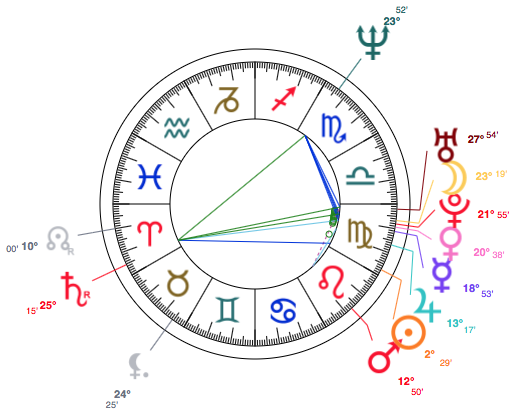 This is my favorite pic of RR, from her latest magazine Rachael Ray In Season…