She’s one of the world’s most notorious Leo stars, but there’s still some debate over her ascendant. Let’s dive straight into a Madonna Astrology Analysis and see what’s revealed about her Star Sign Style…

Leo is the show off – or the showman (showperson?) of the Zodiac.

They are the thespian, the star performer, they love the limelight and to be centre of attention – they’re master of ceremonies and the ringleader (or the lion in the round)… Befitting then that fashion should be show stopping.

Leo ladies lend themselves perfectly to acting, so naturally Madonna progressed her career in the direction of film. 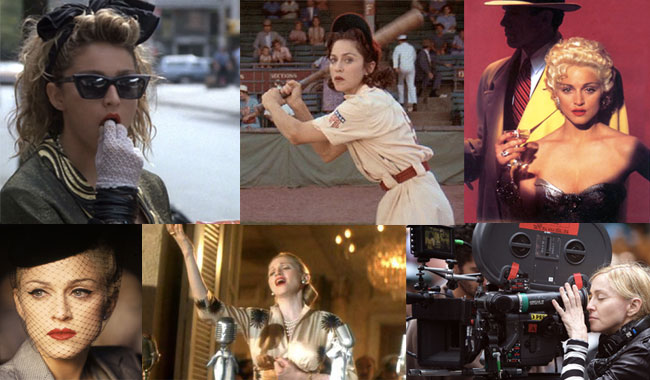 Madonna Stars: Desperately Seeking Susan, A League Of Their Own, Dick Tracey, Evita And Behind The Lens Directing W.E.

Madonna – Moon In Virgo The Virgin…

She dubbed herself as “controlling” (particularly over her kids), is absolutely a health aficionado, and yes, the Virgin superstar Madonna was born under a Virgo Moon! She also has Mercury (Retrograde) in Virgo tied to powerhouse Pluto.

Madge has been criticised in the press for her muscular appearance and ‘extreme’ fitness regime, but has always kept fit through dancing, running, yoga and has always been full of energy.

She typifies her Virgo placements perfectly, was named after her mother, Madonna (born with Neptune & Jupiter in Virgo), and the  ‘Madonna’ is traditionally a representation, figure or image of the virgin Mary.

Virgo loves to keep in shape and is extra attuned to their gut. Read more in Virgo – A Washboard Wonder.

The planet of romance, attraction, and desure, Venus is also in Leo in the horoscope, which add’s fuel to the fire element in her chart!

It ensures she embodies true Leoline looks and adorns herself with a lavish touch. Note gold outfits and statement pieces, and including more than a touch of ostentatious glamour when the occasion calls for it.

Take note of the typical Leo crop too, this sign is pretty particular about their hair and Madge is no exception. Her style in her younger days (above left) is super Leo, a dramatic do’s with loads of height to the hair. Read More In Leo, The Mane Attraction

Madonna claims she’s an Aquarius rising with conviction (see the video interview extract below), although many believe she’s a Virgo rising.

I’d say she’s an aqua babe placing Uranus on the descendant of here horoscope, and putting Chiron in the first house close to the ascendant.

She’s not only a natural rebel, unconventional, and totally original and unique in her approach (an Aquarius trait) she’s also drawn to those outside of what’s usual – from the children in her neighborhood she insisted on pursuing, to her backup dancers on tour. 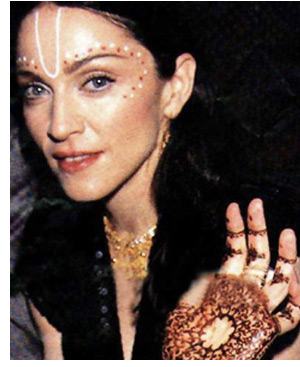 Her fashion and beauty choices are often highly alternative, and totally Weird and Wonderful, plus she has a sometimes shocking yet stoic way of presenting herself.

One of the reasons I find the Aquarius ascendant convincing is because so many of Madonna’s marriage and life partners boast a Leo signature in their own horoscopes, fulfilling the spot in her seventh house of one-to-ones.

First husband Sean Penn was born the day after Madge, with Sun at 24º58′, and Mars in Gemini (her house of sexuality and playful romance). Venus, Pluto and the North Node also sync with her planest in Virgo.

Married on her 27th birthday, Sun + Mars & Mercury (retrograde) were all in her house of marriage – if she is an Aquarius Rising), the Moon in Virgo, North Node in Taurus and Jupiter ready to cross her ascendant… The Mars-Mercury pairing square her natal Mars.

Dennis Rodman has Mars (3º, conjunct her Venus) and Uranus (21º, conjunct her Sun) both in Leo, and like Penn a conjunction to her Mercury in Virgo, this time Pluto, more broadly the North Node, making for an animated meeting of characters. Rodman’s Sun-Moon in Taurus / Mercury in Gemini could also explain why Madonna was keen to ‘make a baby’ or even a family and home with Rodman.

Her son Rocco also lights up this position in her chart, with Sun, Mercury & Mars in Leo, Venus in Virgo; his Jupiter sign is Gemini, showing that during his time of birth Madonna was having a ‘big year’ for creativity, love, and children, and this of course was the year she married Ritchie, too.

It was apparantly a challenging birth (Capricorn Moon in the twelfth house, Uranus conjunct Chiron).

If her Leo Sun were in the seventh it might also explain her fascination with celebrity:

While Madonna is able to transform herself into these different guises in the mirror, it’s perhaps always something ‘outside of herself’, the ‘other’ rather than true embodyment of celebrity. 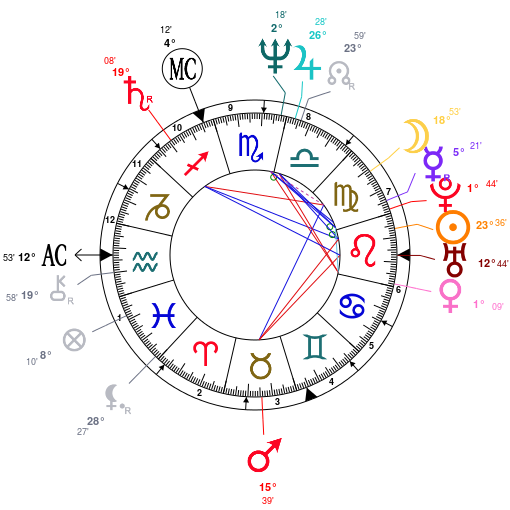 Check Out Johnny Vaughn Interviewing Madge, As The Conversation Turns To Astrology

Full Moon in Aries:Victory is Imminent