Scroll down for Hailey and Bieber astro…

Hailey Balwin’s zodiac sign is Sagittarius as the star was born November 22nd 1996, when the sun had entered the archer’s domain.

Hailey is born at what’s known as ‘the anaretic degree’ of the sign, a power degree. 0º, 1º and 29º are all considered the most critical degree, as the entrance and exit points of a zodiac sign and supercharged with its potency.

It’s not only her sun at this powerful position of the sign (scroll down to see Hailey’s birth chart, below).

Sadly we don’t have a birth time for Hailey, so we can’t get a true astrological portrait. However the vibrant, extrovert sun in Sagittarius is stimulated by Uranus and grounded by Saturn, in an easy and harmonious tie to both the planet of rebellion and planet of discipline.

The moon is in an interesting tension in the chart, in opposition to Venus and at a right angle to Uranus, spelling an explosive temperament. Mars in Virgo is at an angle to Mercury in Sagittarius, so no doubt she has a quick tongue and a sharp wit!

What’s Up With The Stars? Current Astrology For Hailey…

Hailey is currently having a wild ride thanks to the planet that features so significantly in her chart, Uranus, which moved into Taurus mid-May this year.

Because Hailey’s moon sign is Taurus – and more specifically because it’s positioned at 1º of the sign – it’s being influenced by this radical planet of shocks and surprises. Uranus imparts a restless quality, and so Hailey could be feeling particularly excited and compelled to shake things up in her personal life, or her home spaces.

Hailey is more used to this energy than most, because of the position of Uranus in her horoscope, in tension with the moon. However she’s experiencing her first Uranus square, which happens to us all in our early 20s, and marks a time of unconventional behaviour and going against the grain. It’s a time to develop ones individuality and to rebel against expectations – for Hailey it’s highly personal and involves love, with an opposition to her Venus involved.

The question is, is this a good time to get engaged?

Was gonna wait a while to say anything but word travels fast, listen plain and simple Hailey I am soooo in love with everything about you! So committed to spending my life getting to know every single part of you loving you patiently and kindLY. I promise to lead our family with honor and integrity letting Jesus through his Holy Spirit guide us in everything we do and every decision we make. My heart is COMPLETELY and FULLY YOURS and I will ALWAYS put you first! You are the love of my life Hailey Baldwin and I wouldn’t want to spend it with anybody else. You make me so much better and we compliment eachother so well!! Can’t wait for the best season of life yet!. It’s funny because now with you everything seems to make sense! The thing I am most excited for is that my little brother and sister get to see another healthy stable marriage and look for the same!!! Gods timing really is literally perfect, we got engaged on the seventh day of the seventh month, the number seven is the number of spiritual perfection, it’s true GOOGLE IT! Isn’t that nuts? By the way I didn’t plan that, anyways My goodness does feel good to have our future secured! WERE GONNA BE BETTER AT 70 BABY HERE WE GO! “He who finds a wife finds a good thing and obtains FAVOR from the Lord!” This is the year of favor!!!!

Hailey met Justin Bieber back in 2009, with the two rumoured to be dating in December 2014, and by January 4th 2016 it seemed to be official…

The couple had a long spell of almost two years not speaking to each other – they “weren’t friends” between 2016 and 2018.

However in June 2018 they rekindled their romance and on the 7th July 2018 they got engaged in the Bahamas!

With so many planets retrograde rn we’ll have to wait some time to see if this is a love that’s going to last – particularly Uranus, which will dip back into Aries and then hit Hailey’s moon again (twice), finally clearing out by next summer…

This seems to be a long-term period of instability, rather than a time when the dust has settled.

Sagittarius is naturally free-spirited and even wildly adventurous, and I wonder if long term she could be too hot to handle for Pisces Bieber? Or whether she’ll motivate him in his career…

These two zodiac signs are not known as classically compatible, but we have to look at the chart as a whole to see the potential.

As Justin has no planets in fire Hailey could be very good for his confidence, as long as they can find that Libra balance both boast – he a Libra moon, she Venus in Libra…

On the positive side her Venus is beautifully aligned with his Aquarius Mars, and both have a strong connection to Pluto, the planet that helps us transform and own our power. Hailey has a sun-Pluto conjunction, while Bieber has Pluto aligned with his karmic north node of destiny and possibly his Scorpio rising. 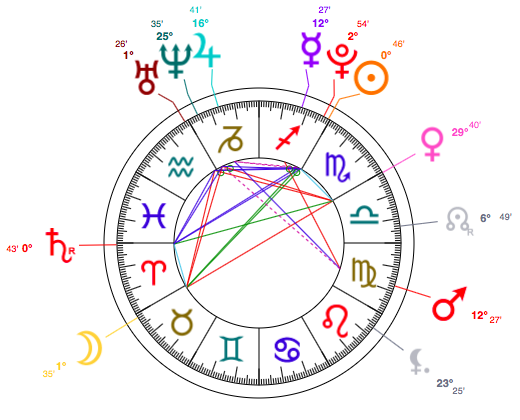 A Pisces With A LOT Of Aries, Rihanna Astrology…