Selena Quintanilla was an Aries.

Actually, she was an incredible and amazing Aries, whose flame burnt bright, but not long enough. I’m really enjoying the Netflix series, and learning more about the singer, as I didn’t grow up on her music or story – and I fully intend on watching JLo in her movie too!

Born on Friday – Venus’ Day in astrology – the singer had an exalted Venus in Pisces, with a sextile to steady Saturn in Taurus, lending an incredible work ethic and talent.

Venus in Pisces is a special placement that can be harnessed in incredible ways, and we know that Selena was a talent not only musically but in her fashion and design, too.

Her Venus is widely square the Moon / opposite Pluto.

Sagittarius Moon bought a strong connection to her home land – Mexico – a foreign place, which was central to her career; we see the Moon in the 10th or 11th house, depending on house system.

The square between Moon and Pluto is tight – 27º and 28º – suggesting a dominating parent, or some kind of controlling dynamic that played out at home, likely her dad who was quite strict apparently.

A Neptune-Jupiter conjunction prominent on the Midheaven points to a huge career, a connection to music and the arts, and fame, and with the Moon present with this strong pairing of planets we really see the influence Selena has on culture but also the influence her own cultural connection had on her.

Born with a Mercury Retrograde in Taurus, Selena’s early years were significant, as in the progressed chart we see her Mercury connect with her Sun, then appear direct –  I believe Mercury this happened around age 18, in Aries, but have to more closely look.

The trine between Mars and Saturn suggests the strong discipline behind the scenes that we can guess the star put into her craft, Pluto makes a wider trine but if casting our eyes over the chart makes up a nice grand earth trine.

I also like the trine between Sun & Moon, which could reflect the warm and loving relationship between her parents.

Selena was an Aquarius rising.

Those born with their ascendant sign ‘Aquarius’ are fascinating people, utterly unique and forward-thinking, going against the grain.

Yet, with her ruling planet, Saturn in Taurus, we can make the connection between traditional values, family, and staying in line, with a solo force.

In fact, while watching the TV show I wonder if Selena was not in fact more spirited and rebellious than the actress plays her!

Her Aries Sun is sextile the self-affirming north node in her first house, so she truly was able to understand what others needed to hear…

I also love her sibling connection, band mates, her close inner circle, and the Aries Sun so wonderfully positioned (I would say in her third house).

LOVE Selena, what a star… 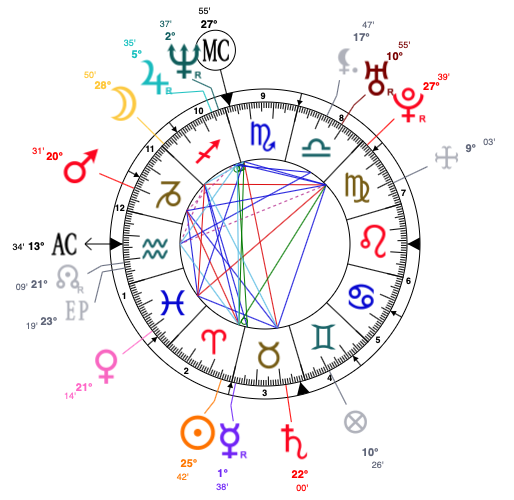