LIBRA LADY CARDI B – BORN ON A FULL MOON….

Although we don’t have her birth time and therefore can’t calculate her full horoscope – including her rising sign – we can tell a lot from her birthday about her personal astrology.

Born on a full moon in Libra season, Cardi B was born when luna was passing through the headstrong sign ‘Aries’.

Although her sun sign encourages her to shine brightly in a fair, balanced, diplomatic way (a la LIBRA), her moon in ARIES craves a more assertive approach.

Aries is the warrior, ruled by Mars, so Cardi B is excitable and finds it easy to become impassioned… One of her favourite talking points is fighting for women’s rights – and she has the perfect placement of Mars in Cancer to assist her with female empowerment!

See her birth chart below.

A member of the Bloods street gang since the age of 16, Cardi B lives out her moon in Aries through brave, no holds barred statements. A former exotic dancer, Cardi B said she became a stripper to escape poverty and domestic violence.

Venus and Mercury in Scorpio are fully expressed in her liberated approach to sexual expression and money! Remember, Scorpio rules both sex and resources.

‘People be asking me, ‘What do you does? Are you a model? Are you, like, a comedian or something?’ Nah, I ain’t none of that. I’m a hoe. I’m a stripper hoe. I’m about this shmoney.’

Since September 2016, Jupiter – the planet of luck expansion – has delivered gifts to Cardi B, with her ‘Jupiter Return’ as the planet entered Libra (co-incidentally, Cardi attended her first NY Fashion Week during her Jupiter Return); she then had Jupiter transit her sun, gaining notoriety in Love & Hip Hop. In 2018, Jupiter (now in Scorpio) touched significant points in her personal horoscope, including Mercury, Venus and Pluto in Scorpio. Jupiter across her Mercury saw an in-depth interview for New York Magazine, while Jupiter connecting to her natal Venus (and Pluto) awarded her Rap Album of the Year, for Invasion of Privacy at the 61st annual Grammy Awards – she was first female artist ever to win the Grammy. Power to Cardi!

Cardi gave birth to Kulture Kiari Cephus on July 10th 2018 when Mars was on her Saturn (in Aquarius), and the moon in Gemini was approaching her south node. Could this baby girl represent responsibility and a past life connection? The stars suggest it’s so!

The sun in Cancer lights up Cardi’s natal Mars, suggesting she’ll be a super protective mom to Kulture.

Born On A Full Moon

You can see from Cardi B’s personal horoscope (below) that the sun and moon were in opposition when she was born.

This means that Cardi B was born surrounding a full moon, a bright time of self-actualisation, with the moon passing through the first sign of ‘self’ awareness, Aries. Full moon’s are celebratory times, and the best time of the lunar cycle to be seen, and to bring things out for ultimate recognition. It’s also the most emotional lunar phase, and the Aries moon makes it even more spirited.

As above, so below, the quality of the full moon will be reflected in the way Cardi B operates – easily gaining the spotlight!

Cardi B Is Super Cardinal!

The Cardinal signs in astrology are the most direct and initiating of all, and this star has personal planets in all four zodiac signs: Aries, Cancer, Libra and Capricorn.

Her astrology indicates a character that’s a true self-starter, a true initiator and business woman. If you find her birth time, email me – [email protected]. 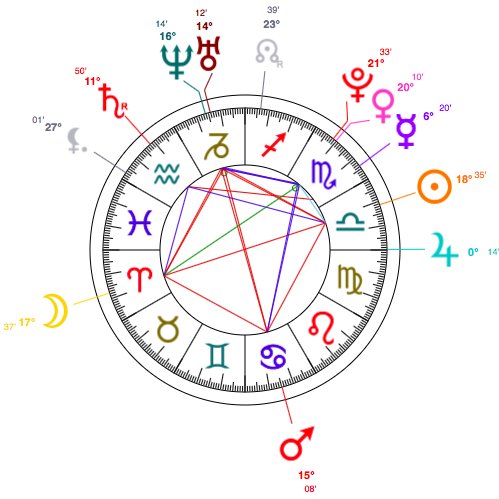